From Rise of Kings Wiki
(Redirected from Category:Chronicles)
Jump to navigationJump to search 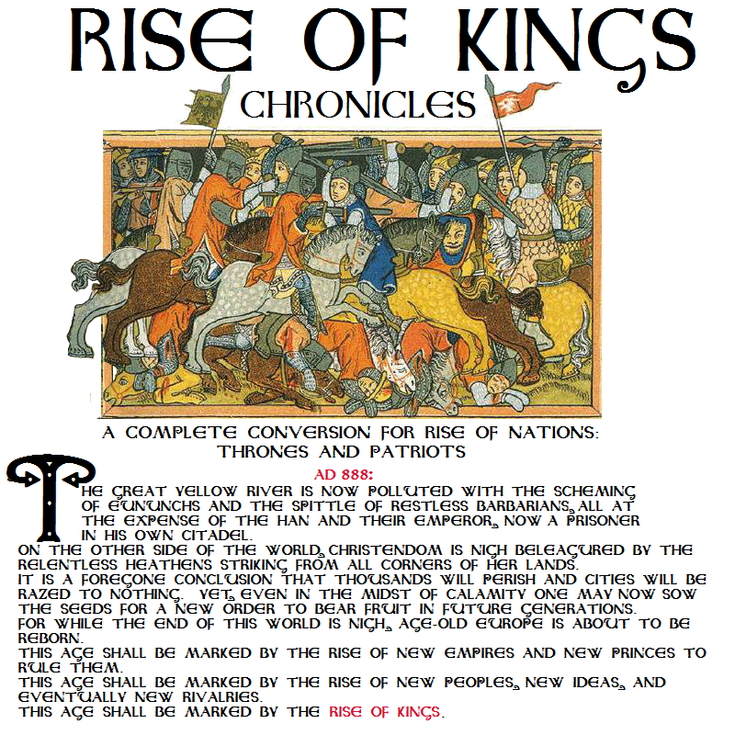 The first instalment of Rise of Kings was a mod subtitled "Chronicles", for the award-winning historical real-time strategy computer game Rise of Nations: Thrones and Patriots initiated by Super7700 and later developed by Beelim Solutions Ltd/Bhd, centred around the cultures of the old world, spanning a historical period of roughly from 888 to 1530CE. It was based around Rise of Napoleon on HeavenGames, a real-time strategy gaming community forum. By 2011, a v1.0 edition was produced (albeit with no unique units) and by 2013 it began to take on its current form with RKC Update 7.

Since then, Chronicles has become one of the more popular mods for Rise of Nations. In 2019-2021, the mod experienced a restructuring, as part of a plan to create a core for designing more mods. A second mod, New World Empires: Swords of the Prophets was introduced to the family — while gameplay-wise it was not part of the Rise of Kings family, it was nevertheless thematically related, covering the same geographic location of Chronicles but being set earlier, namely two centuries before.