From Rise of Kings Wiki
< Chronicles
Jump to navigationJump to search

Factions in Rise of Kings: Chronicles can be sorted by their predominant religion, which plays an important by conferring bonuses as well as unique units for each faction.

Each faction starts off with a fixed religion, each of which has its own special set of bonuses which coupled with the individual National Bonuses of each nation, makes for various different play stiles. For instance, Christian factions tend to favour military buildup, while the three Eastern factions are proficient at wonder rushing, while Muslim factions can alternate between both strategies. 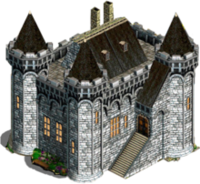 Catholic factions cover 15 of the 18 Christian factions of the game. The Catholics can research Centralisation in order to access more advanced units at barracks and stables in the Imperial Era, which cost more but are nevertheless far more professional. As with all Christian factions of the Dark Age, they have access to religious fanatics and militant clerics, who can be trained at a house of worship, but once they reach the Castle Age, they have the ability to recruit chivalric orders from their Nobles' court. While they do have the abilities of the religious fanatics and military clerics, these units however are costlier, yet far more powerful and dangerous then the mobs of zealots who gather at their churches in anticipation of a war...

Like their Catholic rivals, Orthodox factions are capable of recruiting religious fanatics and clerics from their temples, but do not have access to chivalric orders, and also cannot train advanced military units such as noble knights and guard pikemen. Instead, they share a special technology, Imperial Mandate, with Asiatic factions that allows them to upgrade keeps and militia buildings.

While the Asians do not have access to better military units, they do have access to suicide soldiers, which are cheap and fast-training swordsmen, and can research Imperial Mandate to enhance keeps, castles and military production buildings. These buildings have better LOS, have a gunpowder-based attack and can garrison extra troops. Asians too will discover that they have access to special spies: the Imperial Legate, an assasin with the ability to plant informers, and the ninja, who can conduct assasinations, bribe units, and plant informers. The Asian way of war is thus one of articulated violence: unique units and mercenaries are used to protect massed charges by hordes of infantry into your opponent.

Muslims like Asians can't access better military units through Centralisation, but they have several unique technologies that improve their economic abilities and unlock a different set of units.

Generally, Muslims have the following abilities:

Not all factions gain the same benefits. For instance, the Hospitallers are active in both the Armenian and Serbian factions to reflect their historical involvement with both factions in opposing the extension of Muslim hegemony to eastern Europe in the mid-15th century. Similarly, war dogs and their variants vary differently in their use and provenance — whereas for most Muslim and Asian factions they are trained from the Nobles' Court, the other factions would train them from the Town Watch Guild.