Spear Sergeants are the backbone of your armies. Stronger than Dark Age Spearmen, they are the hardest-hitting melee infantry, and are also endowed with lots of armour and HP. Make no mistake, however, as they easily overtaken by missile units — in particular by cavalry archers, siege machines and skirmishers — and in some cases can be outflanked by faster-moving light infantry or even polearms units which are cheap and can deal massive amounts of damage to units in tight formation. Nevertheless, their long weapons and their endurance means that they are adept at taking out cavalry and towers (albeit bastions, built by factions such as China and Russia will slaughter infantry to a man). Armies of Spear Sergeants however are costly to equip and maintain, and so you may prefer to recruit light infantry, which performs well against all other units save heavy infantry and cavalry. 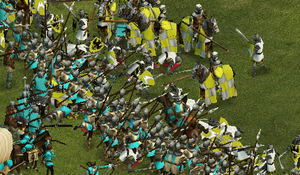 Once that issue is surpassed, Spear Sergeants nonetheless pose a serious threat on the battlefield especially against lancer units. When ordered to hold a line, Spear Sergeants will do just that, so long as there are no barrages of arrows, shells or bullets raining around them. Contrawise, afficionados of pike-and-shot tactics can do no wrong in following ancient Swiss techniques when on the offensive: accompany them with three generals and some religious fanatics. With the attack boosts of your fanatics and your generals' Forced March ability, you will be able to steamroller less well-prepared opponents with ease, even if they bring archers.

Different factions, however, have different variants of pike troops that have different specialties. In the Middle East, heavy spearmen are less important due to the Muslims' preference for cavalry. This is for two reasons: firstly, the nature of desert warfare demands flexibility and mobility, and secondly, it is hard for to equip all-infantry armies with the necessary victuals and transport to traverse the burning plains, even in this very day. Nevertheless, the Saracens do not neglect their melee infantry and while Saracen pikemen are among the weakest of all spear units, they are not wholly pointless in the face of cavalry armies, especially if backed up by other units. The British isles also boast powerful anti-cavalry units in the form of Sciltron Infantry, which are cheaper and more effective against cavalry, but are of questionable offensive worth because of their low speed, low hitpoints and their technological requirements. On the other side of the world, Russia can recruit Gridny Retainers who while function very much like Spear Sergeants, require more metal and less food than usual.

In Europe, the Low Countries offer Flemings as mercenary units based off Spear Sergeants, which differ from them on several aspects: firstly, they cost more but are trained faster; secondly, they are available only in the Imperial Era; and thirdly, they have the long range of pikes, meaning that they are even more deadly against melee cavalry.

The first few centuries of the post-Roman era were highly turbulent times for many communities throughout Europe, which often found themselves at the mercy of several different enemies, and it was thus natural that sooner or later a body of chosen men would be required to supply the strong arms which was needed to ensure survival. A man armed with a spear could defeat many attacking warriors without getting hurt himself.

Mediaeval communities (especially the larger towns and free cities of the High Middle Ages) learned to employ large formations of spearmen, usually clad in some semblance of armour, as a counter to heavy cavalry attacks because horses would not charge home against a bristling wall of spear points. Spearmen were originally deployed in a defensive posture, but the best of the spearman armies, such as the Swiss, Scots, and Flemish, learned to maneuver and take the offensive. From the spear, the pike was developed. The pike was a longer spear with different iron tips for different situations.